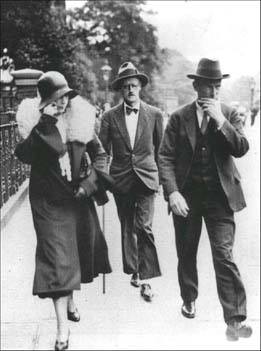 James and Nora Joyce were married on this day in 1931. Joyce chose the day because it was his father’s birthday; he finally chose to get married, in a brief and unannounced civil ceremony in London, for “testamentary reasons.” Given that he had found fame and a measure of wealth, and that his son Giorgio was starting his own family, Joyce wanted to make sure that there would be no estate difficulties after his death.

Joyce had previously claimed, and sometimes continued to so claim even after the London wedding, that he and Nora had been married in Trieste just after they left Dublin in 1904. Joyce’s biographers are dubious of this — as nothing “testamentary” has ever been found, most regard the idea of a Trieste wedding as Joyce’s attempt (largely unsuccessful) to stop the tongues wagging back in Ireland. Although he now wanted the knot officially tied, Joyce made it clear in a letter written before the ceremony to his patron, Harriet Weaver, that he wanted no publicity: “If twenty-six years ago I did not want a clerk with a pen behind his ear or a priest in his nightshirt to interfere with my matrimonium, I certainly do not now want a score of journalists with pencils in their hands intruding where they are not wanted….” But the press got wind of the event the day before —above, a wedding day photo of Nora, Joyce and their solicitor published in the London Evening Standard.